Shouting out Loud! – a sound installation and performance (2017)

Shouting Out Loud! consists of five transportable sound sculptures and four performances created specifically to the old military area of Slipshavn at the island Fyn in Denmark. The sculptures are shaped as both listening and shouting objects, and are inspired by the shape and function of fog horns. The audience is encouraged to carry the horns with them out in the unique surroundings of Slipshavn in order to either listen to the sea through the horns or shout a message to the sea. The scultptures are complemented by poems written by Rasmus Nikolajsen.

The sculptures will be part of a series of performances, where horns in many shapes and sizes are used to create a concert inspired by the sound of fog horns.

Shouting out Loud! is part of the festival Mod.Strøm. Performances on the 10 th and 17 th of September 2017. More information can be found here.

The work is created together with architect Ina Hjorth Jacobsen and visual artist Katrine Würtz Hansen. 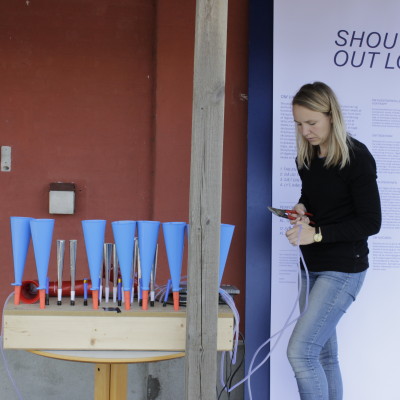