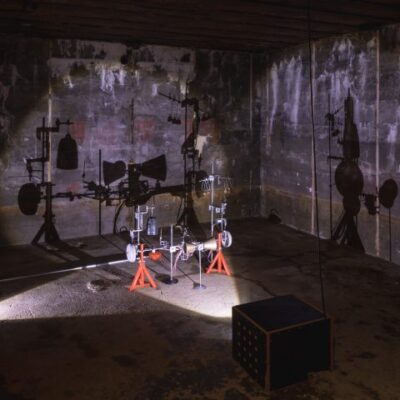 Sounds of the bell from Struer railway station, Japanese prayer bells, an old fire alarm bell from Elsinore, bells from Copenhagen, bells from the door of a store in South Zealand, little brass bells from Poland, German ship bells, a table bell from Sweden, Christmas bells from Norway and a cow bell from Jordan.

For many years the two artists Jonas Olesen and Sandra Boss have collected bells on their travels around the world. INTERFERENCE will bring parts of this bell assortment to life.

The bells in the installation consists of various shapes and sizes, and thus with different sonic expressions. The bells range widely from functionality to frequency, from prayer bells to fire alarms. Each of them has a very specific audible meaning within their signals, for example alarms, warnings and reminders to gather or to disrupt. Common to all these bells is that they were originally designed to pull us out of daily passive listening, they are intended to invoke our auditory attention.

In INTERFERENCE, the bells now appear in a new paradigm, where the sounds are rung out across their geographical and cultural starting points. The system is not transparent. There is no single particular message. Above all, it seems to announce an alternative to the bells originally intended sonic command, overturning the idea of the original and seemingly unmistakable sound meanings of the bells. Instead, they now invite to contemplative and even musical listening, creating a space of new meanings and connections.