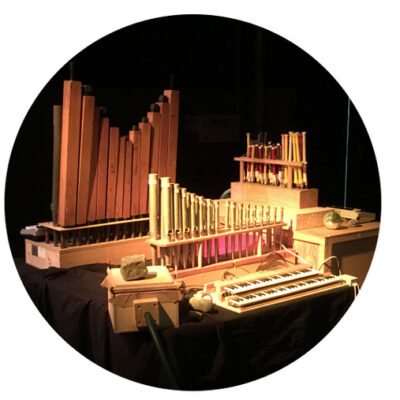 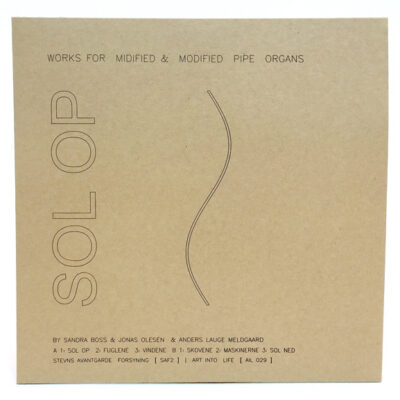 SOL OP is based on a collective composition for unconventional pipe organs made by the three Danish composers and musicians Jonas Olesen, Anders Lauge Meldgaard and Sandra Boss. On three mobile, midified and modified pipe organs,the trio has constructed a musical universe inhabited by animals, humans and machines.

The vinyl record version is released in a limited edition of 300 copies
by Art Into Life (Japan) and Stevns Avantgarde Forsyning (Denmark).

With a diverse array of sonic components floating through every layer of SOL OP, I am most taken by the animal-like sounds. Birds chirp on rolling beds of dancing tones on “Fuglene.” There’s an aqueous sensibility to the rippling cascade of notes moving in concentric circles around the underlying hollow drones. This is one of the many surprising timbres the trio employs throughout SOL OP. By using every aspect of the organs – from the airblower system itself to various mechanical pieces of the organ and the incorporation of MIDI-control – the potential to push into every plane of sound these organs can offer becomes a reality.

(…)There is more a musique concrète approach to be noted in other pieces, of heavily reworked organ sounds. The organ in the three pieces on side B has a more vocalized sound, mechanical perhaps but at the same time warm enough and entirely orchestral at times. And yet, the music also has an alien feeling, something tough to put into words. Maybe distant as well, but it is an attractive distant character. I found this record at times most enjoyable, a bit annoying, strange and comforting. Not all simultaneously, obviously, but over these thirty-something minutes, quite the emotional roller coaster. It certainly shattered my expectations regarding the whole notion of pipe organs.