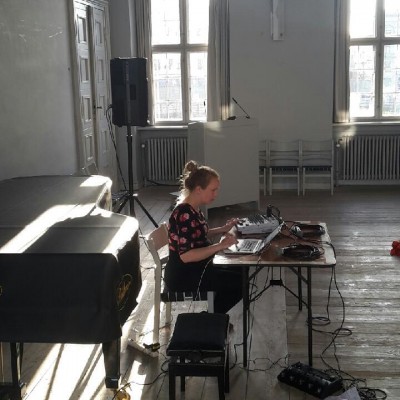 Sandra Boss is a composer and sound artist based in Denmark. Her work evolves in the intersection between performance and installation, where machines and instruments becomes sculptures of sound. She explores the overheard sounds of diverse sound sources both familiar musical instruments but also instruments that was not orginally intended for music making such as hearing test machines, bird flutes, therapy instruments, and test equiptment. She has made works for homebuild or rebuilt instruments, such as a MIDI-controlled pipe organ and an elongated accordion and she has written works for solo musicians, ensembles and choirs.

Sandra Boss has a background in classical music and has later studied electronic music at The Royal Academy of Music in Denmark. In 2019 she finished an artistic-based PhD on sound art at Aarhus University, Denmark, where she explored our conception of hearing through the use of so-called “dead technnology”, that has been used to optimize hearing.

In 2022, Sandra Boss recieved the 3-year working grant from The Danish Arts Foundation.

In 2017, she was awarded the Carl Nielsen Talent Price.

Sandra is part of the sound art duo MASKINEL TERAPI and a member of the artist collective Vontrapp.